We sent these packages to professional ‘unboxers’, who reach millions of people unboxing the latest and trendiest products.

Watch what happened when they ‘unboxed the truth’.

The trendy products in the videos were not made by slaves. But chances are that some of the products you own actually are.

The U.S. federal government compiles an official list of products believed to be the result of child and forced labour. It's extensive and includes 134 products from 73 countries, ranging from coconuts hand-picked in the Philippines to diamonds mined in Angola. If you add to that list the evidence collected by anti-slavery NGOs around the world, the product range extends to garments, jewels, cosmetics, food and tea, among many others.

At present, 70% of the world’s 40.3 million slaves in the world are trapped in forced labour. 30% are in sex trafficking.

Slavery is a hugely profitable criminal business, one estimated to be worth $150 billion a year. That’s nearly three times the earnings of Apple, the world’s most profitable company.

To put this in perspective: if slavery were a country it would have the population of Algeria, the GDP of Bulgaria, and would be the world’s largest emitter of CO2 after China and the USA.

The global economic model is fast delivering cheap products to consumers, but it is out of synch with the human rights agenda. Supply chains have become increasingly long and complex.

Over the past 40 years, international corporations have outsourced parts of their production process to the developing world, where labour is less expensive.

However, rapid outsourcing ushered in modern slavery. As a result, corporations with complex supply chains are now facing great difficulties assessing whether people trapped in forced labour are working in their supply chains.

Governments are recognising the problem. The US, UK, France, Netherlands and several others have already passed laws to encourage companies to take action and clean their supply chains.

Other countries are in the process of doing so. In the past year, we have also seen the creation of Global Fund to End Modern Slavery, which has received contributions for $25m from the US State Department, and $27 million from the UK.

But ultimately, the power lies with consumers. And it lies within a single question: what’s the human cost of what we buy?

Together we can make a difference

The Thomson Reuters Foundation plays a key role in the fight against slavery. We raise awareness of this crime through our news, we train journalists around the world to cover the issue, we provide free legal assistance and legal research to anti-slavery organisations on the frontlines, and we bring together key players in the global fight against modern slavery at our annual Trust Conference.

The Trust Conference is the Thomson Reuters Foundation’s annual event dedicated to the fight against slavery and trafficking. The gathering brings together more than 600 activists, corporations, government officials and thought leaders who are driving the anti-slavery movement. It’s the place where partnerships are forged, and where real action is taken. It’s also where we present the Stop Slavery Award to companies that have taken concrete steps to clean their supply chains. The Award aims to create a virtuous cycle, demonstrating that business can play a crucial role in putting an end to modern slavery worldwide.

The Stop Slavery Award was launched by the Thomson Reuters Foundation in 2015 to recognise companies who can be considered "best in class" based on the policies and the processes they have in place to limit the risk of slavery in their supply chain and operations, as well as on the role they are playing as key agents in the global fight against slavery.

The Stop Slavery Award has gone from strength to strength, most recently with the launch of new categories for 2020 recognising the contribution of SMEs, NGOs, grass roots organisations, the public sector and journalists.

Apply for the Stop Slavery Award 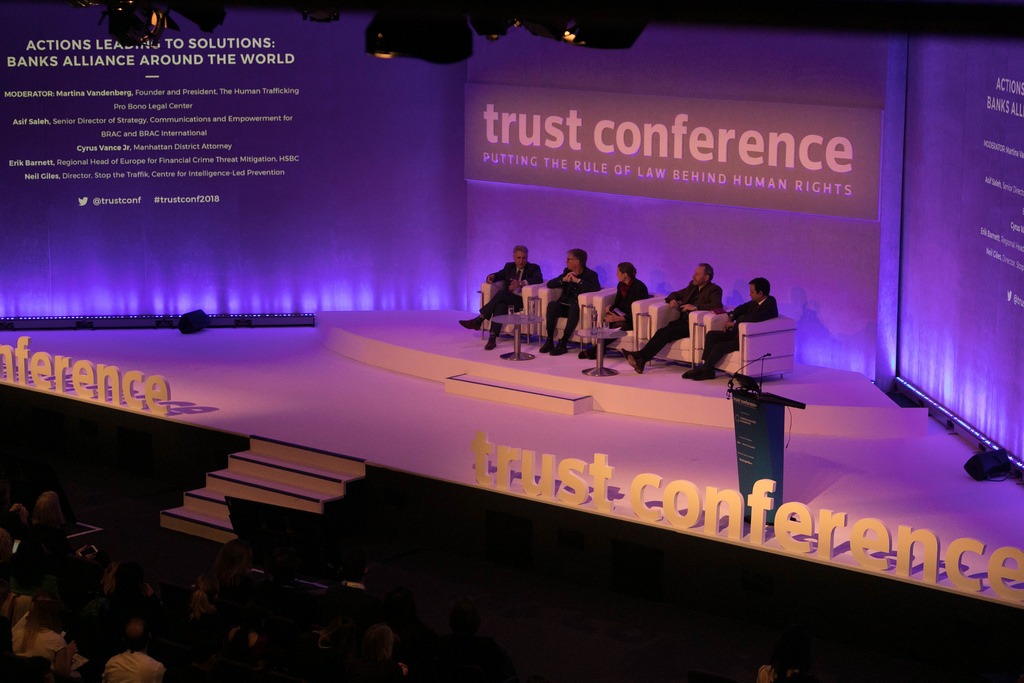 Financial institutions have a key role to play in the fight against slavery. Through data mining and monitoring they can spot suspicious financial activity that can lead to the arrest and prosecution of traffickers. But while significant progress has been made in identifying money laundering and other financial crimes through internationally-shared mechanisms and practices, human trafficking has not been specifically addressed.

In 2013, we partnered with Manhattan District Attorney, Cyrus R. Vance, Jr. to convey top US financial institutions and leading anti-slavery NGOs. The working group produced a set of ad-hoc red flag indicators to help detect and report suspicious financial activity potentially linked to human trafficking. Since the adoptions of the red flags by the financial institutions, the Manhattan DA’s office reported a significant spike in the number of Suspicious Activity Reports.

Following the success of the US initiative, the Financial Alliance has been replicated in Europe.

The Thomson Reuters Foundation has the world's largest team of dedicated journalists reporting on the issue of modern slavery. They produce daily news, in-depth investigations, and short documentaries from around the world. Our news holds people, governments and corporations to account. Our investigative reporting and daily coverage gives a voice to survivors and to those at the frontlines, contributing to public awareness thanks to the dissemination of our news to hundreds of media outlets around the world, reaching an estimated daily readership of 1 billion people.

Slavery is a difficult crime to report on. That’s why we share our editorial expertise and know-how by training other journalists to navigate the complexity they might encounter when investigating and writing stories on human trafficking. From privacy laws to data mining and financial regulation, our training courses put hundreds of reporters on the right track. Impunity and corruption fuel slavery. Ensuring that the rule of law is upheld is fundamental to making progress in the fight against human trafficking. The Thomson Reuters Foundation’s TrustLaw programme connects leading anti-slavery NGOs with top law firms providing crucial free legal assistance and cutting-edge legal research. This vital contribution gives changemakers in the frontlines sharp tools to demand policy change and ensure the rule of law is used to drive the fight against slavery.